Climate change and global warming specifically, or global cooling for that matter, is inevitable. The earth’s climate, is not a constant. The earth has warmed and cooled many times before. What is happening today, has happened many times in the earth’s history and we, as a species need to be prepared for it this time, because the last time global warming occurred approximately 130,000 years ago, our species was in its infancy and we hadn’t built any of the conurbations of today. The city as we know it today, didn’t exist then and, as a species, we stand to be affected much more, than the last time the globe warmed up.

As architects today, we need to have at least a basic comprehension of Climatology and Meteorology, since climate change and global warming (or cooling) will have an ever increasing effect on architecture. As the creators and shapers of peoples’ habitable environments, we need not only to understand the climate of today, but we also need to understand its history. The more we understand of our past, the better prepared and equipped we are for our future.
How we deal with the inevitability of rising sea levels as the earth warms up yet again, should be our primary challenge. Not our primary fear.
In order to corroborate these statements, we need to put things into perspective and to do so, we will require a palaeo-climatological departure point.
In its history, the earth has experienced many warming and cooling cycles, usually lasting thousands of years at a time. These warming and cooling phases, are determined by many cosmic and geophysical occurrences, ranging from the earth’s:

·         Solar Inclination (Axial Tilt or also Obliquity); and
·         Orbital Eccentricity; to
·         Astronomical Precession
with all these factors collectively known as the Milankovich cycles. However, the last Glacial or freezing period, started around 110,000 years ago and may have been intensified by a geophysical event, being the earth’s last volcanic super-eruption at mount Toba in Sumatra, around 75,000 years ago, which spewed millions (if not billions) of tons of ash and sulphur dioxide into the atmosphere, effectively diminishing Insolation from the sun and thus, together with the Milankovich cycles, caused the earth to cool down even further, bringing about a glacial phase, most commonly known as the Wisconsin Glacial Period, which peaked at what is known as the Last Glacial Maxim (LGM) around 21,000 ybp (years before present).
However, it is important to understand that today, the earth is once again in a warming phase, in what is known as the Holocene Epoch, which is a natural warming phase or called an Interglacial period, which has existed since the end of the Last Glacial Maxim and presumably commenced around 15,000 ybp. What this means, is that the earth has been naturally warming up since then and none of our industries, as we know it today, were even present then. It is estimated that this current Holocene Interglacial or warming phase, might last for the next 20-30,000 years.
The previous Interglacial phase, prior to the last Glacial Period, and most commonly known as the Eemian Interglacial, lasted approximately 16,000 years. It is estimated that it began around 133,000 ybp and peaked at 125,000 ybp. During this period, the polar ice sheets contracted and our sea levels may have been between 4 to 6m higher than what they are today. However, the fact remains, that we have now settled in our large cities, often located in low lying coastal regions, which are presently up to 6m below the sea level of the Eemian Interglacial.
The advent of the industrial revolution, heralded the introduction of another globe warming factor, but unlike the Naturally Induced Global Warming factors described above, this is an Anthropogenic Induced, or man-made global warming factor and it is being blamed exclusively for the current state of affairs. Yes, it is a large contributory factor and yes, it is certainly expediting and exacerbating the current global warming phase and yes, the rate at which we have been burning fossil fuels are damaging to the environment and we do need to find more sustainable energy sources. But Anthropogenic Induced Global Warming, is not the only contributor. The earth is naturally warming up, and we need to prepare ourselves in dealing with this occurrence. The earth will definitely survive our species, but our species, may not survive the earth, if we fail to act now.
On the flip side, extreme global cooling is not only possible within a warming Interglacial phase, but it is in fact a historical reality and it might abate perceptions that the earth is warming. However, these cooling phases within an Interglacial phase, commonly known as a Stadial phase, are usually relatively short. The most recent examples of cooling phases or Stadials within our present warming Holocene Epoch, are the Younger Dryas event which occurred around 11,500 – 9,600ybp and is speculated to have spawned the Agrigultural revolution in the Levant and there is also what is commonly referred to as the “Year without a summer”, as recent as 1816, when the volcanic eruption of Mt Tambora on the island of Sumbawa in Indonesia in 1815, plunged the Northern Hemisphere into a volcanic winter, that triggered more than a year of unusual and devastating cold weather and drought, causing food shortages across the Northern Hemisphere. It is further generally speculated that this event triggered a larger movement west wards from New York, towards the Great Lakes, thus causing an increased human settlement in the area known today as Chicago.
It could be said that the “Big Freeze” that Europe is experiencing in 2011/2012, is a result of the volcanic eruptions in Iceland, during March 2010, similar to that of 1815/1816.
In addition, we should not lose sight of the fact that, despite all the warming and cooling cycles, or Glacial – and Interglacial periods, the earth is also still existing in an ice age, known as the Quaternary or Pleistocene Glaciation Period, which started around 2,58million ybp and during this period, the earth’s ice sheets have expanded and contracted numerous times, as they are currently contracting, causing sea levels to rise and lower periodically.
The fact remains that our planet’s climate is not a constant, but rather in a constant state of flux and it affects our societies and human conurbations, in more ways than we can imagine. As architects, we need to incorporate this knowledge into our buildings and cities of the future.
As architects, our challenge is to acquaint ourselves with these factors and its effects on human habitation and to pro-actively fashion a new architecture and urban landscape, which will work in unison with these Naturally Induced Global Warming and Cooling cycles. But we also need to implement an architectural vernacular which will subsequently seek to initially alleviate and eventually eliminate dependence on fossil fuels, causing Anthropogenically Induced Global Warming. We should not be mere passengers in a bobbing life raft, at the mercy of the elements, but we should take charge and create climatically synchronised or harmonious habitations, whether on- or under land, or in- or under the water.
Perhaps our buildings and cities of the future should be made floatable, instead of floodable. Or even submersible and sustainable under water for certain periods of time. 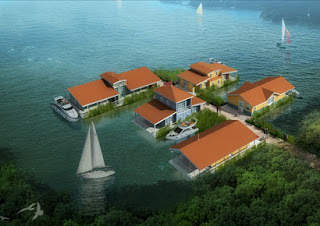 MBH Architects
We strive towards the creation of TRANSIT ORIENTED DEVELOPMENTS (TOD) with a balanced MIXED USE of activities - dwelling, shopping, working, schooling, health care, worshiping and recreation - all within a walkable configuration, where many clusters of neighbourhoods, interlinked with parks and walkways, cycle lanes, tram ways and metro rails, form urban environments that decreases the private stresses of time in traffic and minimises the public born expenses of road construction and atmospheric pollution.